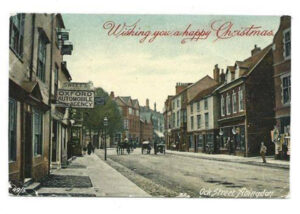 The team at BH&O have been working harder than ever throughout this year but still had time to do some charity work for those less fortunate.

Throughout November and December, we have been collecting gifts and also acting as a collection point (even during Lockdown 2.0) for Abingdon Community Events, who have been gathering toys and gifts for babies through to 18 year olds, so that those children and young people from families known to the Food Bank and social services, who are struggling to make ends meet, will all have decent presents this year.  Last year, A.C.E ensured that nearly 400 children had gifts, but this year, given the pandemic and its impact on families, we anticipate that more children will need to be supported. So word went out, and we’ve received all sorts of fabulous gifts. My personal favourites were some of my best loved toddler board books – I love ‘The very hungry caterpillar’!  But we have had everything from Harry Potter to Little Mix!!

This is the third year we have participated in this event, but this year, it’s been the most successful.  Gifts came from our team, but also came from friends, neighbours, other businesses in the area, and all over.  It’s been a great community effort, so a big thank you to everyone who has donated.

The partners at BH&O also joined forces with Alex and Emma Glass of EasyStorage Thames Valley to buy 312 chocolate selection boxes, to add to some already donated, so that all those children could also have a chocolate treat this year too!

Earlier this year, we also made two donations to charities that we work closely with. We donated £500 each to Abingdon Carousel Family Centre and Flag DV.  Both charities have seen an impact to their income, at the same time as families needed their services more than ever.

We have also just agreed to sponsor a therapy/treatment room at The Abingdon Bridge, a charity specialising in in helping children and young people aged between 13 and 25 years old with mental health issues, and in mentoring and supporting them.  We saw an appeal on Facebook for this a few days before Christmas and acted quickly to sponsor one of their new rooms was sponsored so that they can open in their new premises in the New Year. We recognise that 2020 has meant that young people’s mental health has been under greater pressure than ever, and wanted to support the charity in this important work!

Finally, we’re ending the year wearing our Christmas Jumpers and tops for PACT, a charity we’ve had a long involvement with, and the firm has also made an additional donation to PACT.

2020 has felt a very long stressful year for all of us, and many of our clients and families we work with. We’re all hoping 2021 will be better!  So from everyone at BH&O, we wish you a Merry Christmas, and a Happier New Year!

Regardless of whether you are married, divorced, or separated, co-parenting is never easy when you and other parent have different ideas and views surrounding parenting.

International women’s day this year must for many working women take on a greater significance? Most of us have spent the last 12 months going

Family mediation – working together to resolve your family issues.

With the court process, the court or Judges decide these things. There are often long delays, and cases can be adjourned without you having a

Kinship care: What order do I need?

At BH&O, we know what a great job many grandparents, aunts and uncles and relatives are doing in looking after children who might otherwise be

Grandparents Day approaches this weekend and this year, it must surely take on a greater significance? We are in the middle of a pandemic, and

3 Ock Street; the home of BH&O

When we formed this firm just over two years ago, whilst we set out to establish a modern, innovative law firm for the 21st Century,

Boardman, Hawkins & Osborne LLP (registered in England and Wales OC401342) trading as BH&O LLP is a Limited Liability Partnership authorised and regulated by the Solicitors Regulation Authority (number 647667). Our registered office is 1-3 Ock Street, Abingdon OX14 5AL. The term ‘partner’ is used to refer to a member of the partnership. Our partners are Emily Boardman, Ruth Hawkins and Irena Skapin Osborne.